On the 12th of April, the University of Malta Sports and Leisure department organised the 4th edition of the UoM Ring Road Races, which comprised of a 5k and 2k individual race, a 5k relay and finally an 800m fun run for children. Savio AC had already taken part in the 2nd edition with Jonathan Herrera, Matthew Saliba, David Camilleri and Luke Gauci winning the relay race in a course record time of 15:42. This time around, we fielded in two teams with the aim to win the race again and go for an even faster time.

Race day came along and after the 5k and 2k races the final briefing was given to all seven teams taking part in the relay. Our first runners were Spanish trail runner and marathoner Carlos Mantero for the A-team and the returning David Camilleri for the B-team. These guys had the longest leg starting their run from the track, running up to the ring road and completing one whole lap of the ring road before handing the baton over to the second runner. As expected, it was a two way race from the start between our A-team and DGTri a team made up of three Birkirkara St. Joseph athletes; namely, multiple national triathlon champion Keith Galea, his brother Dermot, Barry Farrugia and St. Patricks’ tri-athlete Alixander Schembri. Carlos started the relay fast, immediately behind Schembri’s tail and both of them set the pace for the rest. Meanwhile, David produced a very satisfactory run too in order to try to keep up with the excellent running of the front men. A lap of the track and a lap of the ring road were soon over and it was on to the second leg runners. Schembri edged out Carlos by a few seconds and the change-overs were done efficiently by both teams. David came around soon after and handed over the baton for our second team to the youngest athlete in the race, thirteen year old Jake Gauci. 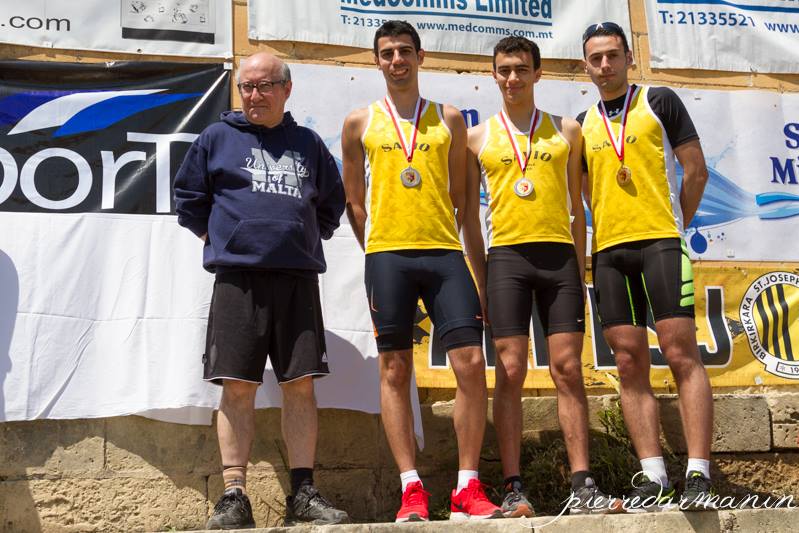 For our first team it was now the turn of Luca Cacciattolo to keep up with much more experienced Keith Galea. This proved to be a very difficult task and though Luca ran a fast leg, Galea managed to extend the lead for DGTri and gave his brother a lead that could have been controlled well. Our youngster Jake finished his lap round the ring road in a quick time as well, proving that he is a very promising athlete and one to look out for in the future, handing over to David Borg.
Dermot Galea tried to further extend the lead for DGTri but our third runner Kurt Dalli had other thoughts. Kurt went out fast and in a matter of a few hundred meters had caught up with Galea and we were back on track to gain the lead. What DGTri had built along the whole race so far vanished in a couple of minutes. This very impressive leg by Kurt was a well fought run, with both Kurt and Galea exchanging the lead a few times until they came sprinting the last few meters to hand over to the last leg runners at exactly the same time. David and Jake, on the other hand, had practically secured a third place finish for our second team extending the lead over 4th placed LaSalle and Sacha had an easy task to bring us home in the bronze medal position.
Up front it was a battle between Farrugia and our Luke so as to determine who would bag first place. Farrugia had a slight advantage in the beginning, a few meters which Luke immediately took away and the two of them exchanged places. Experienced Farrugia followed Luke closely for the majority of the leg until 120 meters to the finish line, at which point he burst out of the bend with a sprint. Luke tried to hold him off but could not keep up with this pace and finished the race a mere 4 seconds behind Farrugia.

The race was breath-taking; our third placed team finishing in a very respectable time of 17 minutes beating the teams behind them by quite a margin. On the other hand, Savio AC’s other team missed out on first place by just a few meters, but we were still able to dip under our previous record by 5 seconds, finishing the course in 15:37. First placed DGTri clocked in at 15:33.
These results go to show how intense this race actually was and it is always very interesting to have two or more teams battling out for the top honours. Proud by our own results, we at Savio AC congratulate DGTri and the other teams and we look forward to the next one!
We will be back! Always and forever #comeonyellows!